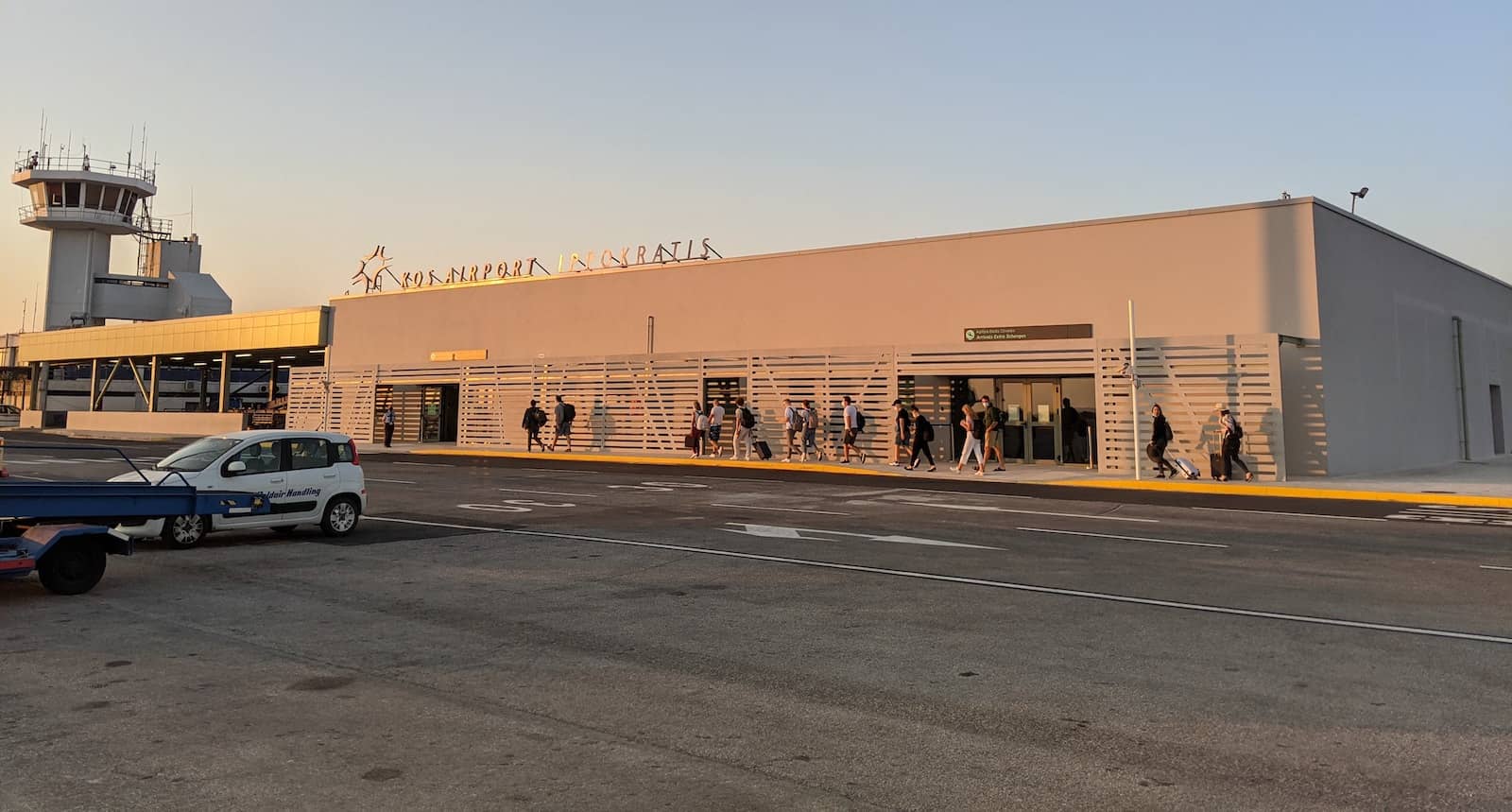 Find information about your Airport Airlines

Find information about your Airport Transfers

Kos Airport, which is also referred to as Hippocrates, is located in the Greek island of Kos close to the village of Antimahia. It is 22km south-west of Kos town.

Kos Airport was fully civilian airport and was operated by the Hellenic aviation authority. On 22 March 2017 the ownership of the airport was transferred to Fraport Greece (a joint venture of Fraport AG Frankfurt Airport Services Worldwide and partner Copelouzos Group) under a 40 year concession operation contract. it serves as an international point of entry for the rapidly developing tourist destination island.

Kos Airport
In addition, Kos Airport often receives and offers regular flights to Athens and Rhodes. As a result of Kos Airport’s development as a preferred destination, the airport handles many chartered flights. Regular service is offered by Olympic Airlines and Aegean Airlines. As an international point of entry the airport handled 2.676,644 million passengers in the year 2019. Kos Airport’s single terminal covers some 5900 square meters and is equipped with select amenities that will surely welcome you onto the island, giving you the promise of a pleasant stay. At the airport you will find a selection of restaurants, cafeterias, light refreshments and bars to meet your energy needs at Kos Airport.

Kos has had an International Airport since 1964. The high tourist traffic, beginning from April and lasting until the end of October, led to expansions both on the runway and at the airport facilities. The airport was operated and supervised by the Civil Aviation Authority, until it was privatized, along with 13 other Greek regional airports in 2015.

Kos Airport Hippocrates, is one of the most busiest airport in Greece with nearly 3 million passengers.

To get to Kos Town via taxi, from Kos Airport Hippocrates it takes about 35 min without traffic and will cost about 50 euro.

Currency exchange spots, duty free shops, car rental offices, cafes and outdoor parking locations are at the disposal of passengers that arrive or depart towards dozens of destinations. From “Hippocrates” there are flights lasting approximately 50 minutes, from and to Athens and also charter flights from countries abroad, during the months with high tourist traffic.

The airport is connected to the city of Kos, via the provincial road Kos – Kefalos. The journey by car lasts about 30 minutes. The address to be used for a navigation device (GPS) is: Kos Airport, 853 02 Kos, Greece

Kos is the island of Hippocrates, the Father of Medicine, but it is also the island of bicycles. Kos has been inhabited since 3,000 B.C. It is located in the center of the Dodecanese and is the third largest island in the area, following Karpathos and Rhodes.

Kos is the second largest island in population following Rhodes (33,388 inhabitants) and the area of the island is 295.3 sq.km. The island is 200 nautical miles far from Piraeus and is also called as the “island of Hippocrates”. It is also characterized as the island of bicycles, since there are endless bike lanes.

The city center is very cosmopolitan and it offers multiple options. The archeological museum and the ancient market will take you back to the past, while in the modern market you will find all kinds of products and all forms of entertainment.

The market of Kos is a consumer’s paradise. The prices on jewelry, leather and clothing will amaze you. The city of Kos is a crossroads of cultures, a multinational mosaic of architecture, style and personality.

The main port is full of life, since it is one of the most popular destinations for yatchs in the world.

Taxi: If you prefer a taxi service from the airport you have to go to the taxi stand outside the terminal and it is available during airport working hours. Alternatively, you can book a driver, thus a taxi driver will be waiting for you in the arrivals area.

Car Rentals: Pre-booking your car hire before you travel is usually ideal. At the airport there are car rental companies, whose offices can be found at the arrivals area. You will need an ID or passport, your driver’s license and a credit card in order to rent a vehicle.

Bus: The airport is served by ‘KTEL KOS S.A.’ and is connected, through regular bus routes, with the city of Kos, the port of Mastichari, Kardamena and Kefalos. The airport bus stop is within walking distance of the terminal building. Tickets can be purchased on the bus, from the driver.

Each traveler and visitor to the airport has free internet access. In order to connect, select the network named Fraport-Free on your device and open the browser to navigate to the welcome page.

There is a limited number of free parking spaces available opposite the terminal.

In case of emergencies, Kos airport has a First Aid Station. For more information please contact the Airport Information Centre.

Scroll back to top